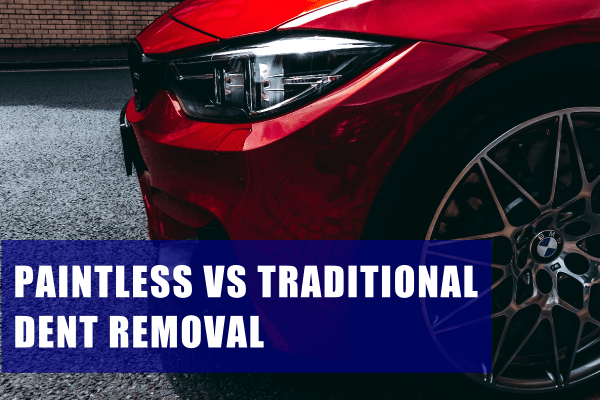 We have all been there: a dent in your beautiful car, truck or SUV. Maybe you made a tiny error, or worse yet, maybe someone backed into your vehicle in a parking lot. Regardless the cause, a dent is a dent, and you want to see that dent go away – fast and cheaply. In this article you will see how paintless dent removal and traditional dent removal work, and which method is right for you.

Paintless dent removal is a method by which a dent is repaired without sanding, bonding, and painting. First, the dent cannot be too deep and must be accessible by the technician to perform the work. There might be braces or joints that obstruct access. Secondly, the paint must be intact before and after the repair, which means the paint cannot be disrupted as a result of performing the repair. This makes paintless dent removal a limited option in some cases.

Now, this is how paintless dent removal it is performed. First, the technician will need to maneuver behind the dent and use special tools to work out the dent slowly and carefully. Using this process, the dent should go back to its original form, paint intact. Lastly, the technician uses a straight-light to true the form of the panel.

If paintless dent removal is not an option, then traditional repair is next way to go. With traditional dent repair, the technician pulls the dent to a certain degree, making the damaged area workable. Next, the technician prepares the area to accept the bonding material. With skill and artistry, the technician fills the dent with material to match the panel’s original form. Lastly, the area is sanded and professionally painted back to its former glory.

This type of repair is used when it is more cost effective to perform a repair versus completely replacing the damaged panel. Given the number of steps involved, drying of paint, and the artistry in perfecting the shape, conventional dent repair does take some time to complete.

Quality Assured Collision Center has been serving the Long Beach, CA community since 2004. We specialize in collision repair, body work, dent repair, car restoration, and mechanical work. Quality Assured Collision Center is iCar Gold Class certified, a certification met by only approximately 10% of shops. We can offer towing, drop-off and pick-up and even perform a free 15-point inspection on your vehicle. As experts on all insurance situations, we will help guide you through the process and we work with all types of financing situations for those paying out of pocket.