What Are ‘Acts of God’ in Auto Insurance? 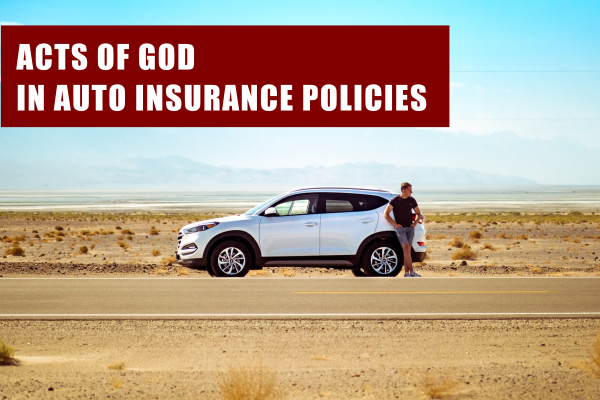 Act of God insurance is also known as comprehensive, liability, and collision insurance. This is where you are unable to logically prevent an accident from occurring. You cannot foresee acts of God, such as a lightning strike, hurricane, flood, hitting an animal, earthquakes, or theft of a vehicle. Having an insured vehicle is a necessity because acts of God could strike at any time. While liability and collision insurance are important, comprehensive cover is often neglected. It’s essential to have full coverage as acts of God can happen at any given time. So, what are acts of God in auto insurance, and what are you likely to be covered for?

Thousands of drivers have unfortunate collisions with animals. Some are minor and the animal is lucky to walk away unharmed; of course, some aren’t as fortunate. Hitting an animal, such as a bird or deer is often known by auto insurers as an ‘Act of God’. This means you cannot have foreseen the animal on the road or been able to avoid it. For example, you’re driving on a quiet country lane. It’s night-time and the road looks clear. Suddenly, a deer jumps out from nowhere and you can’t slow or swerve to avoid it. Unfortunately, the deer hits the bumper and causes significant damage. Luckily a damaged bumper is an easy fix at your local, trusted auto body shop.

This is a total act of God because it was by chance you were on the road and the deer jumped out when it did. You didn’t intentionally hit the deer, and you couldn’t predict it would be there. Another instance is when a bird hits the windscreen and causes a crack. Most auto insurers class it as an ‘Act of God’ and will cover you for the damages.

Trees Falling on Your Vehicle

It’s the middle of the night. A violent windstorm has started. You hear a loud crash, and your car alarm starts beeping. Unfortunately, your vehicle was in the path of the falling tree and caused it significant damage. It’s often known as an ‘Act of God’ in auto insurance. The car is on your property and the tree wasn’t a risk to anyone before the storm caused it to become uprooted. This is known as an Act of God and can often be covered by comprehensive cover. When a tree on your property damages your vehicle and one on another property, your liability insurance may also cover the costs.

Earthquakes are naturally occurring events. You cannot prevent them, and it’s difficult to predict them. Of course, they can cause significant damage to your property and vehicle. For example, a 6.5 earthquake strikes during the evening. It’s quite a violent earthquake. Your vehicle is parked in your garage but that sustains serious structural damage. As a result, your vehicle is struck by falling debris. This is what’s known as an ‘Act of God’ for auto insurers and it’s an event you cannot prevent. Fortunately, most insurance companies will cover damages in such events, which eases the financial burden on you significantly.

Other Acts of God in Auto Insurance Policies

There are several events that auto insurers will class as an ‘Act of God’; those include:

Of course, there are many more examples of what auto insurers will call an Act of God. In some instances, your insurance company might not compensate you. For example, flooding is often a grey area of insurance. When you live in a coastal area or a flood-prone city, your insurance company is unlikely to pay for flooding even though it’s technically known as an Act of God. Sometimes, insurance companies will put a clause in their policies that specifically states regional flooding isn’t covered. If you don’t live in a flood-prone area, it might be included but you should always check the fine print of the policy.

Do You Need Auto Insurance to Cover Acts of God?

Natural disasters or accidents cannot be predicted or even avoided. If you knew a bird was going to fly into your window, you wouldn’t go out. You can’t predict that, however. You can’t predict when a seemingly dormant volcano will erupt or when a hailstorm dents the body work of your new car. Simple Acts of God can, however, cause grey area in auto insurance. So, it’s crucial to read the fine print of your policy. Auto insurance is a necessity for most drivers and may prevent you from facing a mountain of debt caused by Acts of God.

Get Insured and Stay Protected

While some Acts of God are not covered by your insurance provider, many will be. What’s more, Acts of God can come in many forms and aren’t predictable as you might think. While you can keep an eye on the weather, a hailstorm could start in the blink of an eye. It’s important to have auto insurance to cover such things. You need to understand what auto insurers class as an Act of God, so you get sufficient coverage too.